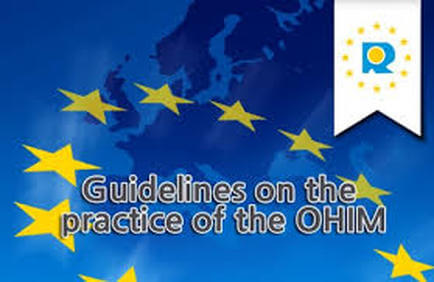 On 1 August 2015, the second set of the updated OHIM’s Trademark Guidelines entered into force. As explained in our previous post, the guidelines contain general practical instructions on all different steps of the registration process, including ex-parte and inter-partes proceedings before the trademark Office of the European Union.  They are not legislative texts and, therefore, they are not binding, but subject to discussion before all relevant administrative/judicial bodies (OHIM’s Opposition Divisions, Board of appeals, nation and regional Courts, European Court of Justice).  As to the content of the new updated version, this post analyzes relevant changes / addition under Part A, Section 2 (General principle to be respected in the proceedings), Paragraphs 2-3.

Paragraph 2 relates to the “right to be heard” of the parties involved in a proceedings before the OHIM. It is clarified that, in the context of ex-parte proceedings, the right to be heard covers all the matters of fact or law, together with the evidence that forms the basis for the decision. However, the right to be heard does not apply to the final position that is going to be adopted. Therefore, the Office is not bound to inform the parties of its legal opinion before issuing a decision and to afford them the opportunity to submit their observations on that position, or even to submit additional evidence.

As to the examination of the case, the updated guidelines clarify that the Office, in proceedings based on relative grounds of refusal (e.g. an opposition or cancellation action based on an earlier similar trademark), although it is restricted to the facts/evidence/arguments filed by the parties, this restriction does not prevent it from taking into consideration, in addition to those facts already put forward, facts that are well known, that is, those that are of common knowledge,  likely to be known by anyone or that may be learnt from generally accessible sources or those arising from practical experience. The Office is not required to prove the accuracy of these well-known facts and, therefore, it is not obliged to give examples of such practical experience; it is up to the party  to submit evidence to refute it.

Paragraph 3 of the updated guidelines relates to the “general principles of EU Law” to be respected by the Office, principles such as equal treatment and sound administration. In this context, it is pointed out that there must be a stringent and full examination of all trade mark applications in each individual case, in order to prevent trade marks from being improperly registered. The lawfulness of the Office’s decisions must be assessed solely on the basis of Community regulations, and OHIM is not bound either by its previous decision-making practice or by a decision given in a Member State, or indeed a third country, that the sign in question is registrable as a national mark. In this connection, it is worthwhile noting that, recently, the OHIM is applying a more stringent practice when it is called to decide if a sign is distinctive or not (or, maybe, descriptive). Many trademarks are being refused for lack of distinctiveness/descriptiveness, being some of them already registered in other jurisdictions. Although the Office cannot be bound by decisions given in other countries, it is also true that sometime a right balance should be found in this delicate field, taking also into account a fundamental principle laid down in the Paris Convention, the “Telle Quelle Rule”, according to which a Member State should, if possible and not totally against its own registration rules (which, in any case, are quite harmonized at international level), accept for registration a sign in the same form it has been previously registered in the applicant’s country of origin.

Other changes/news included in the updated Guidelines will be analyzed in future posts.