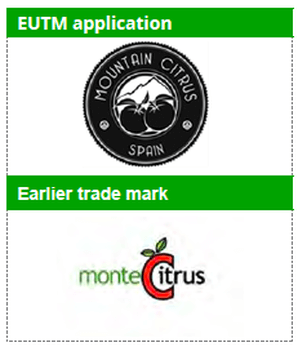 In Case T-495/15 dated 16 March 2017 (General Court of the EU), The applicant (Spanish oranges, SL), applied for protection in Europe in classes 29 and 31 (fruits, vegetables and oranges) the Trademark “MOUNTAIN CITRUS spain” (see above).

The third party Sociedad Agraria de Transformación, considering the requested mark confusingly similar to its prior EU trademark MonteCitrus (see above), filed an opposition to obtain the refusal of the competitor’s Trademark application before the European IP Office (“EUIPO”).

The EUIPO’s opposition division dismissed the opposition and the Board of Appeals confirmed the decision, both bodies considering the two signs not sufficiently similar to cause confusion in the market.

The opponent filed an appeal before the EU General Court  (“GC”) to have the trademark “MOUNTAIN CITRUS Spain” finally refused.

The GC dismissed the appeal by taking the following view:

Despite the identity of the goods, the aural similarity and the high conceptual similarity, the General Court found no risk of confusion. This is because, according to the Court, the visual analysis is of greater importance than other parameters in this specific commercial sector (fruit and vegetables) where the consumer directly selects the products from the counter: the consumers thus perceive the goods mostly “visually” and not phonetically or conceptually.

Another reason that reduced the relevance of the conceptual similarity in this case was the idea of  “Mountain citrus”  being weak/descriptive of the products in question (oranges, vegetables, etc.), so not of great impact on the consumers overall perception of the marks.