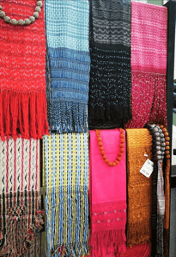 IP AND THE MEXICAN REBOZO

There is no doubt a rebozo is one of the most representative garments for mexican women. However, very little is known about its origin.
A rebozo is a rectangular piece of woven cloth called “lienzo” with fringes called “rapacejos”, they can be made with cotton, silk or wool.
It is quite common that people confuse the rebozo with the shawl, but there are many differences between these two garments, for instance a rebozo is wider than the shawl, it is more colourful and more expensive to produce, is made one at the time.

The origin of the rebozo is unknown, but the first descriptions were made during the Colonial Period, although indigenous women wore a garment called “ ciua nequetlapacholoni”  that means “a thing that touches a woman” .[1]

There are to ways to weave a rebozo, with a backstrap loom and with European style looms. Either way the process is long and requires a  lot of meticoulus work. It can take up to 15 people and 6 months to finish one rebozo ready for sale.

The rebozo colors and patterns are different in each town. They have their own elaboration process, which is transmitted from generation to generation within a community, and although today there are some workshops or a few “rebozo schools” that teach the weaving techniques, instruction is mainly oral, and includes the know-how, practices and skills. There are ranks of apprentice and teacher. Nowadays, rebozo is used by all kinds of women, regardless of social class, the idea that rebozo is used only by indigenous or peasant women has been forgotten. The rebozo has evolved to be a current, fashionable garment, even a luxury garment, as there are some that contain threads of gold or silver. In the case of Camelia Ramos Zamora, renowned Master Artisan of the rebozo, located in the town of Malinalco, the State of Mexico has innovated by designing garments and accessories that contain original rebozo fabric for men and women.

There are various events that are held periodically to promote the use of rebozo, such as the “Tápame con tu rebozo” event, which is an Artisan Fair of Rebozos and Textiles in Mexico City.

This famous mexican garment has been part of the literature, music, and painting in Mexican culture and more and more personalities from all areas of life carry them with pride.

For these reasons, the Rebozo is part of the cultural and social identity of Mexican women, since it reflects their beauty, delicacy and strength, and therefore, must be considered as part of the Traditional Cultural Expressions (ECT) and even as Traditional Knowledge (TK), as previously mentioned, because the elaboration techniques have centuries of history and are transmitted from generation to generation, within a community.

The current intellectual property system in Mexico offers few options to protect the works of artisans.

In the area of ​​Copyright, the National Institute of Copyright offers a type of registration called “Applied Artwork Registry” (Obra de Arte Aplicado), which is defined as an “artistic work applied to objects of practical use, whether they are works of crafts or works produced on an industrial scale, but so far, the authorities have refused to grant any certificate to artisans who have submitted applications for the protection of their works.

Also, modifications were made to the Federal Copyright Law, in its Chapter III Of Popular Cultures and Traditional Cultural Expressions, however, this has not generated any real and effective change that benefits the artisan union, and the reason is, they leave aside the artisans who work individually and offer no legal defense mechanism or specific sanctions are established for those who use works or part of the works that Mexican artisans create and profit from them.

In the Industrial Property area, workshops or artisans who perform rebozos can protect their name by registering a trademark, but unfortunately very few artisans have access to adequate legal advice and management to carry out these procedures.

The legal challenges for the mexican artisan community are daunting, in addition to discrimination against women, lack of subsidies, and poverty.

In order to generate a change that really benefits the artisan communities, it would be beneficial to:

Establishing legal defense mechanisms is crucial, in case nationals or foreigners misuse the creations of the artisans, or produce cheap copies to market “pirate rebozos” made in China, as it is actually happening.

The Mexican government should create reliable and effective legal defence mechanisms to protect the Traditional Cultural Expressions, which are part of the cultural heritage of Mexico.
Since the profits from the sale of each rebozo are the only source of income for families and entire communities, it is important that artisans receive fair remuneration for their work and that in turn there is economic and sustainable growth for themselves and their communities.