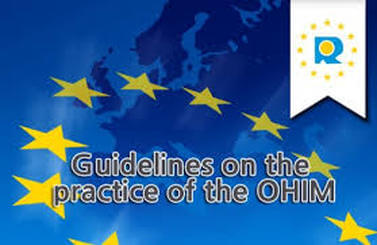 On 1 August 2015, the second set of the updated OHIM’s Guidelines entered into force. The corresponding documents are available on the OHIM’s website.  The OHIM’s Guidelines are the most important point of reference for users and professional practitioners of the CTM system who want to know more about the OHIM’s examination practices which, sometimes, goes way beyond what is written in the relevant legislation as such (basically, the Community Trademark – or Design – Regulations, and corresponding implementing Rules). The  Guidelines contain general practical instructions on all different steps of the registration process and also inter partes proceedings. Although they need to be adapted to the particularities of the case, if followed, the Guidelines are an excellent starting point to reduce all kind of procedural issues, Office refusals, obstacles during the registration, while helping to face in a proper way the inter parte proceedings before the Office (oppositions and cancellation actions).  Having said that, it is important to point out that they are not legislative texts and, therefore, they are not binding, being subject to discussion before all relevant administrative/judicial bodies (OHIM’s Opposition Divisions, Board of appeals, nation and regional Courts, European Court of Justice).  As to the content of the new update, this post will analyze relevant changes / addition under Part A, Section, Paragraph 3, regarding “Means of Communications and Time Limits”. In particular, it is useful to highlight two specific additions / clarifications: i) It is clarified that “the date of receipt of a document, by any means (fax, post, hand delivery, etc.) is the date on which the Office receives the communication and (most relevant) the time of receipt is the local time in Alicante (Spain): considering that documents can reach the Office from different countries in the world, that is an interesting information in order to avoid confusion due to time difference between countries; ii) another interesting addition is the one related to the time of notification of emails sent by the Office to users: it is clarified that the document (or email) is deemed to have been notified to the user five (5) days after being placed in the holder’s inbox, irrespective of whether the recipient actually opened and read it. This last point is not totally in line with some other national administrative practices, but in any case important to be taken into account by users in order to avoid unpleasant oversights. Other changes/news included in the updated Guidelines will be analyzed in future posts.