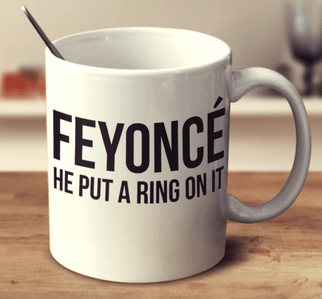 Influential pop star Beyonce is suing Texas-based company FEYONCE Inc. www.feyonceshop.com for selling t-shirts, tank tops and hoodies bearing the word Feyoncé, and coffee mugs emblazoned with the phrase: ‘He put a ring on it’, allegedly a reference to the 2008 Beyonce hit song ‘Single Ladies’. The prices range from $14.95 to $39.99 American dollars.

Defendants Andre Maurice, Leana Lopez and Lee Lee have not yet released an official statement, however, Andre Maurice has at least two trademark applications pending:

Additionally, Beyoncé herself, when interviewed on the matter, said that a year ago she sent the defendants cease and desist letters and they failed to take any proper action.

Our opinion is that FEYONCÉ and FEYONCE does lead to confusion for consumers, as people see these words as being in connection with BEYONCE and are led to believe, mistakenly, that the merchandise is authorized and/or endorsed by her.

As a high profile celebrity, Beyonce and her management company own a variety of registered trademarks relating to her name, such as: BEYONCÉ, BEYONCE´, BEYONCÉ HEAT, BEYONCÉ HEAT RUSH, BEYONCE PULSE, BEYONCÉ MIDNIGHT HEAT, BEYHIVE, and BEYONCE HEAT WILD ORCHID.

We expect that the plaintiff will ask for injuctive and monetary relief, including damages and attorney fees based on Federal trademark infringement, unfair competition and trademark dilution.

However it is impossible to accurately predict how the process will unfold. In the case of “Louis Vuitton” versus “My Other Bag MOB”, a Southern District Court of New York held that the “My Other Bag” canvas totes were a parody of Louis Vuitton’s expensive bags and thus, there was no likelihood of confusion.

So, the question is, where are the limits in claiming fair use, or asserting that you are simply parodying a registered trademark? Is the limit when the company relies on the reputation of a well-known trademark to make profit?

Beyoncé´s law firm Pryor Cashman has not yet released a statement, but as one of the most powerful female musicians in America we believe this is just the beginning of the story. Go Queen Bey!